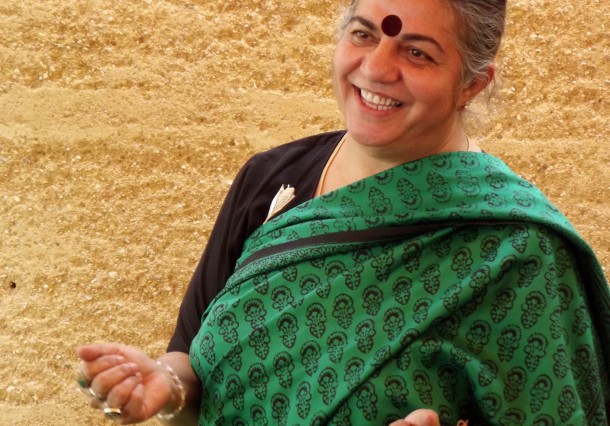 An Open letter by Dr. Vandana Shiva* to Prime Minister Modi and President Obama from democratic, concerned citizens of India and the US:

We, as concerned and democratic citizens of India, and the US, welcome the coming together of two of the largest democracies of the world to work together to protect the rights of their citizens and their biodiversity. Both nations were founded on the principles of freedoms of our people, and the acceptability of colonialism and subservience to Empire.

President Obama, you have been invited by Prime Minister Narendra Modi, to India’s Republic day celebrations on 26th Jan, 2015. In 1930, on 26th January, the people of India pledged to demand Purna Swaraj or complete self-rule independent of the British Empire. (Literally translated from Sanskrit, purna, “complete”; swa, “self”; raj, “rule”.)
The people of India observed 26 January as Independence Day. The flag of India was hoisted publicly, across India, by Congress volunteers, patriots and the citizens of India. The declaration stated the following:

We believe that it is the inalienable right of the Indian people, as of any other people, to have freedom and to enjoy the fruits of their toil and have the necessities of life, so that they may have full opportunities of growth.
We believe also that if any government deprives a people of these rights and oppresses them the people have a further right to alter it or to abolish it. The British Government in India has not only deprived the Indian people of their freedom but has based itself on the exploitation of the masses, and has ruined India economically, politically, culturally, and spiritually. We believe, therefore, that India must sever the British connection and attain Purna Swaraj, or complete independence.

We write this letter in the spirit of Swaraj-of Bija Swaraj (Seed Freedom) and Anna Swaraj (Food Democracy), with the hope that your visit to India will enhance and deepen the common freedoms of the people of India and the US, not the freedoms of the Corporations undermining the freedoms of citizens in both countries. Your visit coincides with pressure being put by the US, on behalf of its corporations, to undermine seed freedom in India. Our particular concern is Intellectual Property Rights in the area of biodiversity, seeds, and living biological resources.

On 30 September 2014, the US & India issued a Joint Statement on the occasion of Prime Minister Modi’s meeting with President Obama,in the US.

Agreeing on the need to foster innovation in a manner that promotes economic growth and job creation… committed to establish an annual high-level Intellectual Property (IP) Working Group with appropriate decision-making and technical-level meetings as part of the Trade Policy Forum.

We hope that fostering innovation refers to real innovation and not theft from nature or other parts of the world.

LIFE IS NOT AN INVENTION

Source: http://navdanya.org/campaigns/478-seed-freedom-and-food-democracy
______________
* Shiva is an Indian scientist and activist and enjoys international fame with her fight and work for the protection of biodiversity, small scale farmers and sustainable farming practices. In 1993 she received the “Right Livelihood Award”, a kind of alternative Nobel Prize.