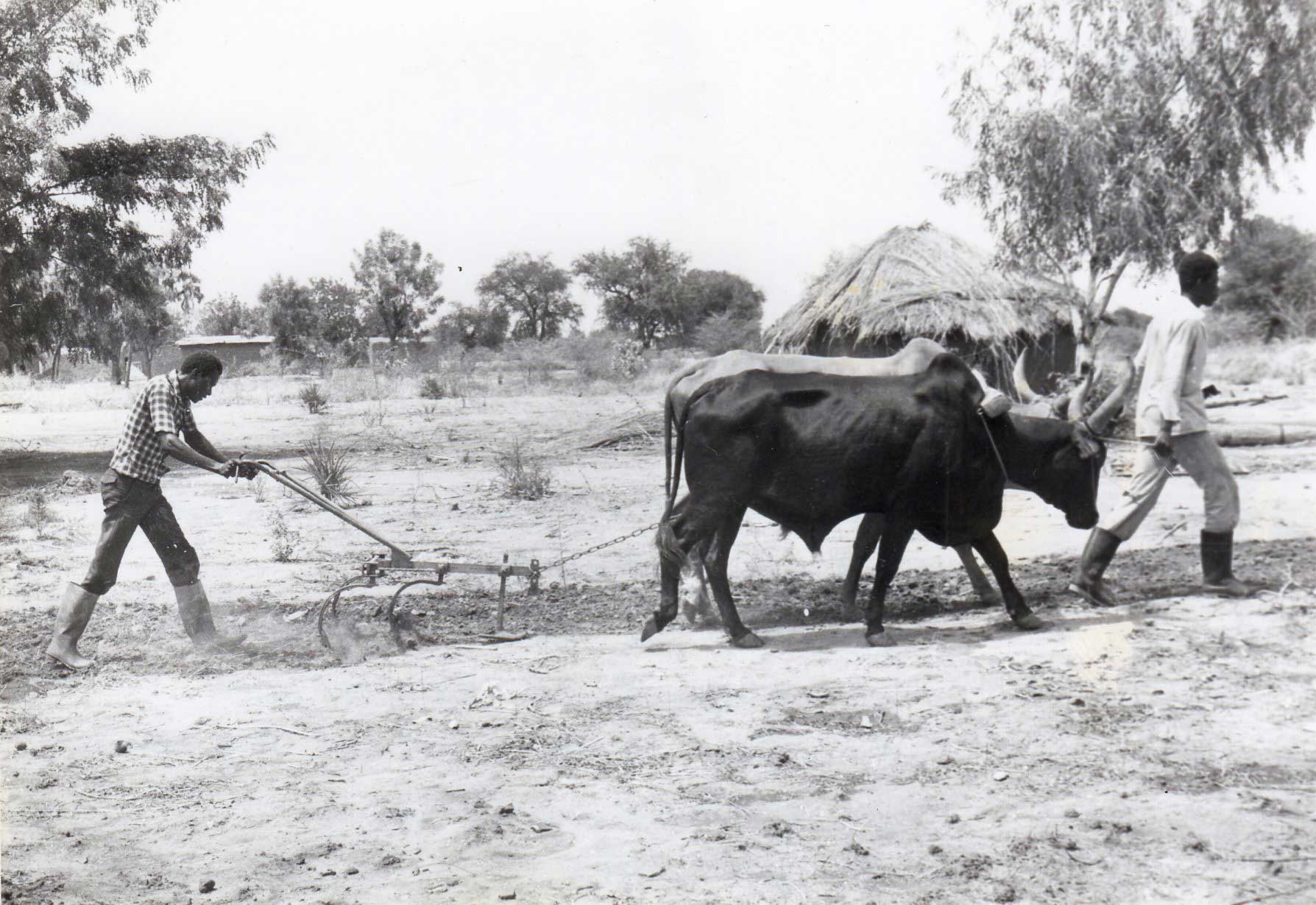 What can give a new impulse to agriculture in Africa, and how can young people get involved in this? And what role can development aid play in this?

The 25th of April, 2016, in Amersfoort, in an interesting discussion evening organized by the Scientific Institute of the Dutch political party SGP, I was allowed to speak about this and other relationships between international poverty and agriculture.

European agriculture has a direct impact on agriculture in Africa. Overproduction in Europe will lead to lower revenues for millions of farmers. This benefits consumers, even in developing countries. But that is an illusion. Because countries become dependent on imports when farmers can not invest to improve their production. And that leads to increasing consumer prices. Because of the power of the distributive trade, the supermarket, farmers here know by experience that higher consumer food prices do not automatically yield higher incomes for farmers.

TTIP
The possible free trade agreement TTIP, and homogeneous CETA, are bad for Europe, the Netherlands and developing countries. Prices that farmers here and in developing countries receive for their agricultural products would come under further pressure and would cause poverty among the farming population.

As a proposal to the European Commission: design a survey questionnaire among all farmers. Then we will know how they feel about a possible TTIP. That is a method to inform them more adequately about it also. A recent survey shows that only 11% of farmers in the Netherlands is well informed about TTIP, while TTIP could have a major impact on their businesses. More of half of the farmers who are well informed about it, opposes TTIP.

There’s a lot at stake. And Europe’s efforts to act as the big Goliath along with the US are of course bizarre. Especially when Trump holds sway in the US. All this can only call for resistance in other parts of the world and then other powers may increasingly present themselves, which is something Europe and the US are already painfully being confronted with.

What the world needs, and where Europe benefits from, is fair play, communication, collaboration with everyone. It is not imaginary at all, that Europe will soon be looked at as an extension of America. If so, we are a long way from home.

Seeds
Using locally collected and propagated seeds is very important in Africa and South America. Already, these have proven themselves to be good.

This month April 2016 at the United Nations, La Via Campesina, a large international interest group for small farmers in developing countries, has urged FAO to support the selection and multiplication of local seeds by small farmers and not the biotech companies, which already impose genetically modified crops on African farmers and governments. Nowadays, La Via Campesina is deeply concerned about these developments.

Ghana and Burkina Faso are known to have major problems associated with genetically modified crops. And in March 2016, India has found a way to throw Monsanto out of the country. Namely, the Indian government then decided to drastically reduce the royalties that local businesses pay for Monsanto’s genetically modified cotton seeds. This was in reaction to complaints from Indian cotton farmers about excessively high costs that Monsanto would charge them.

Land grabbing
10 million ha or 5% of the total arable land in Africa is owned by European investors and is meant for food crops for consumption in Europe. This could otherwise feed 65 million people suffering from food shortages. (Yu et al., 2013)

Thus, there is a one-sided flow of nutrients from Africa and South America to here. Because of that, there they have a deficit and here we have excess, allowing us to forward minerals which enter the surface water resulting in an eutrophication effect, which together with residues of medicines and chemical pesticides pose a serious threat to ecosystems in water. And with that also to the fisheries and ultimately our health.

Beans (haricots niébé; cowpeas) and on the left on the background an irregular stand of the sorghum in Tsjaad (Sahel)

Composting cow manure of nomadic peoples along with crop residues and possibly human excreta could provide some relief in the Sahel. Maximum soil coverage against dispersion can also make a contribution to the maintenance of soil life. European agricultural land is in need of organic matter and minerals, but for the time being not so much in need of phosphate, because phosphate is generally sufficiently available in it.

European agriculture could therefore make use of fresh compost to a much greater extend. For this cause our techniques and capacity for composting and also the logistics provide many possibilities. Moreover, the option of compost also relieves us from dealing with storages crammed with manure to be spread on the land in the spring, when the soil is too wet, as is the case again this year in our country.
Compost also helps to combat the problem of the leaching of minerals into the groundwater and its runoff to surface water. In our relatively densely populated continent, we produce great amounts of kitchen scraps and the potential of separating and composting these gets better. Compost in the Netherlands is also increasingly becoming cleaner thanks to the deposit on plastic bottles and a ban on plastic shopping bags.

Many young people do not have good opportunities or occupations, making it more likely for them to fall into poverty and get off track while also making them more susceptible to recruitment practices as is the case not only in North Africa but already in some West African countries also. Therefore, offering opportunities and perspective to these young people is so important.

On April 19, 2016 during his visit to the Netherlands UN Secretary Ban Ki-moon told students in Leiden and The Hague, that a quarter of the world’s population is now under 25. He said that the earth has never been so young.

In local agriculture and food production many young people and their parents living in poverty Africa could find perspective and future prospects if these get attainable for them as well as financially attractive and promising. A good example is the young farmer Adama Traore (19) in Mali. I think the best thing we can do is give people “over there” opportunities.

Development aid is giving each other fair opportunities to be self-reliant in a sustainable manner.

Also, international market disruptions of emerging economies must be discouraged as much as possible.

Example: a poultry project for young single mothers in Douala. The Stichting Steun Kansarmen in Kameroen (SSKK) helps these single mothers to build their own independent lives. For this they are handed tools they think they can do something with, for example, to learn to keep poultry, and to sell the chickens on the market. The nice thing about chickens is that you can start with a few and you can expand the number according to the possibilities that are there.

Then Europe, of course, must not dump cheap chicken legs in Cameroon, because we prefer to eat chicken filet. Because of this kind of dumping, beautiful promising poultry farms have gone bankrupt in the past.

Instead of dumping cheap food there (chicken wings, milk, grain), we would better export cheap green minerals for which there is a demand.

Green minerals
Green minerals from manure from over here can, in the form of microgranulates, go to countries where farmers live in poverty, so that they can buy it at a cost price and use it on their land, along with crop residues and compost. This can give an enormous boost to the local economy and food production in developing countries. And it forms a nice benefit for the mineral balance on both sides.

Nature Plants of April 18, 2016 published a study showing that intensification of agriculture in the tropics, from the Amazon to Africa, requires a lot of phosphate fertilizing. Phys.org published this article on April 18, 2016.

In the Netherlands, the project SCARLET-PLUS  is currently running, that is successfully working on a technique to recover green minerals from residues of animal manure in a sustainable, energy-efficient way. My company Buizer Advies is a partner in this project. Those minerals are then free of pathogens and antibiotics. So: green minerals, in the same proportion as in the manure but very concentrated. This makes it convenient for transport and they can be applied in small amounts near the young crop plants. This could give a tremendous impetus to the work of the mostly small farmers in Africa.

Each container with bananas, avocados, coconuts, coffee and cocoa that comes through here, can, once empty, be filled with the concentrated microgranulates to bring to the desired destination in Africa.

Project Proposal
In the context of development aid ‘Starting urban farming’ projects could be organized for unemployed young people who are interested in the self-cultivation of vegetables. This allows them to get interested to go into agriculture so that agriculture, along with other key initiatives, can get a good boost again.

Opportunities
Europe can, with good and honest trade and investment practices with respect to African agriculture and by stopping unfair competition, show themselves to be a reliable partner. That would also, on a global scale, create a good image of our country and of Europe.

The Netherlands as a highly skilled country in the field of plant breeding, agro-ecology, water management, soil management and fertilization, can be a good partner of many countries in sub-Saharan Africa.

N.B. The original version of this article ( April 26, 2016 ) is a representation of the speaker note (open in PDF) for the SGP discussion evening of April 25, 2016 and is among others, also published in Biojournaal  and Wij Maken Nederland! In the update of April 30, 2016 information based on an article in Phys.org is added about a recent study in Nature Plants (April 18, 2016) in which the great need is described for phosphate in the tropics. (The phosphorus cost of agricultural intensification in the tropics. Nature Plants, 2016; 16043 DOI: 10.1038/NPLANTS.2016.43).